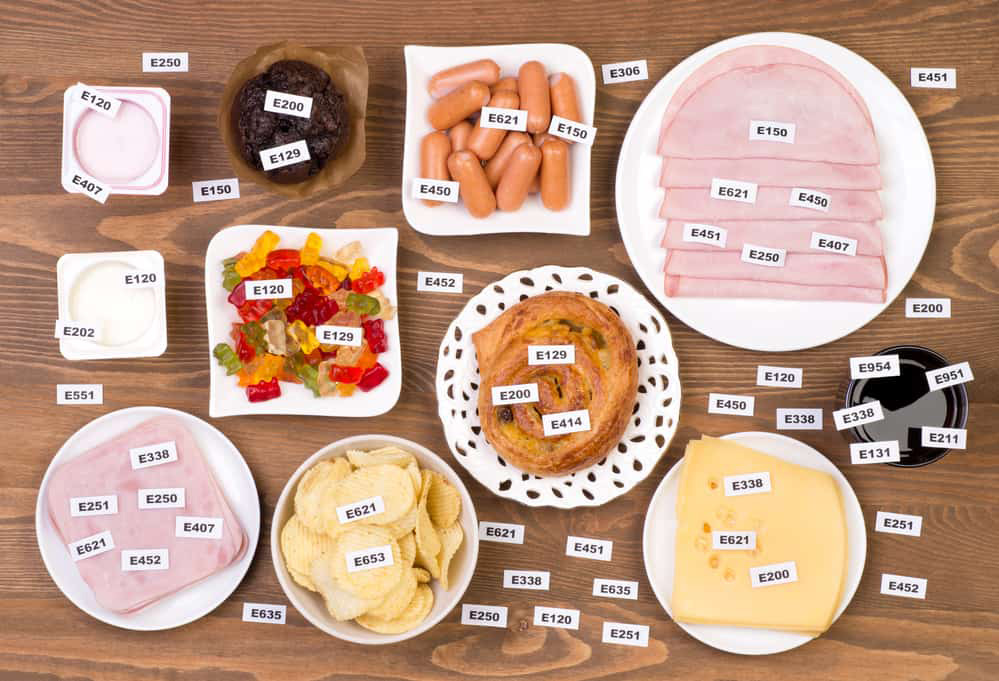 1）Benzoic acid and its sodium salt

Benzoic acid is a commonly used organic fungicide. In a low pH environment, benzoic acid is effective against a wide range of microorganisms, but weak against acid-producing bacteria.
When pH is higher than 5.5, it is ineffective against many molds and yeasts. The optimum pH of benzoic acid for bacterial inhibition is 2.5-4, and the minimum mass fraction for complete inhibition of general microorganisms is 0.05%~0.1%.

2）Sorbic acid and its salts

3) Propionic acid and its salts

Propionic acid is a liquid with a stimulating acid aroma similar to acetic acid, which is a normal intermediate of human metabolism, so it is not toxic and its ADI value is not restricted.
Propionic acid is effective against mold, aerobic bacteria, gram-negative bacteria, especially against Bacillus coli, which makes bread produce filamentous mucilage, and prevents aflatoxin, so it is commonly used in the production of bread and pastry. Propionate salt has the same preservative effect, commonly used as calcium salt and sodium salt.

4）P-hydroxybenzoic acid and its esters

Para-hydroxybenzoic acid ester, also known as nipagin ester, is a colorless crystal or white crystalline powder, tasteless and odorless. It is mainly used in soy sauce, jam, refreshing drinks, etc.
The anti-corrosion effect is better than benzoic acid and its sodium salt, the usage is about 1/10 of sodium benzoate, and the suitable pH is 4-8. The toxicity of p-hydroxybenzoate is lower than benzoic acid, its water solubility is poor, and it is often dissolved by alcohols before use, and the price is higher.

Where a small amount is added that can make mutually insoluble liquids (such as oil and water) to form a stable emulsion of food additives called emulsifiers.

The trade name of sorbitol fatty acid ester is span (span), span class emulsifier in the alkali-catalyzed addition reaction with ethylene oxide, you can get Tween (Tween) class emulsifier.

Soybean phospholipids, also known as soy lecithin or phospholipids, is a light yellow or brown transparent, translucent viscous material. He is a by-product of soybean oil production, is a natural surfactant. Its main components are lecithin, ceruloplasmin and inositol phospholipids. As an emulsifier, soy phospholipid has excellent emulsification, antioxidation, dispersion and moisturizing properties, and has been widely used in food, instant milk, margarine, granulated beverages, nutritional emulsifier, etc.

2）Thickeners
Thickener is a class of food additives that can improve the viscosity and change the performance of food.
① Gelatin
Gelatin is white or light yellow, translucent, slightly lustrous flakes or fine grains, its main component is protein, is a high molecular polypeptide polymer obtained by partial hydrolysis of collagen contained in animal skin, bone, cartilage, etc.. Gelatin gel is tough, elastic, good pressure-bearing, dissolves in water at 30℃, and condenses into a gel after cooling.
② Maltodextrin
Maltodextrin, also known as water-soluble dextrin or enzymatic dextrin, is made from various types of starch as raw material, which is converted by enzymatic process with low degree of controlled hydrolysis, purified and dried. Maltodextrin is widely used in candy, whey cream, fruit tea, milk powder, ice cream, beverage, canned food and other foods, and is a filler and thickener for various foods.
③ Pectin
Pectin is a kind of polysaccharide substance widely existed in plant tissues, its main component is galacturonic acid, which is recommended by FAO/WHO Joint Committee on Food Additives, and is recognized as a safe food additive without the limitation of the added amount. At present, the main raw material for the production of pectin is citrus fruit peel.
④ Carrageenan
Carrageenan is a natural plant gum extracted from red algae and is the youngest of the three major seaweed gums: fucoidan, agar gum and carrageenan, whose main components are D-galactose and L-galactose. Carrageenan is extracted from raw materials such as unicorn cabbage, salicorn, and hornwort. Carrageenan used in food industry mainly has the characteristics of gel, viscosity, stability, emulsification and suspension, and is widely used in dairy products, ice cream, juice drinks, bread, hydrogel (see jelly, etc.), meat products, canned food, etc.
⑤ Xanthan Gum
Xanthan gum is a safe, non-toxic, tasteless new food additive, with excellent thickening, suspension, emulsification, stabilization and other functions. Xanthan gum is an extracellular heteropolysaccharide produced by Xanthomonas campestris with starch as the main raw material through a series of biochemical reactions, whose main components are glucose, mannose, glucuronic acid, etc. The molecular weight is up to millions, which is the most commercially valuable microbial polysaccharide products at home and abroad, with the largest production and the widest market coverage. Xanthan gum has excellent thickening properties, using a very low concentration, it can achieve the required viscosity. Xanthan gum can form a stable thickening system when coexisting with high concentrations of sugar or various salts.

1）Acidifier
To give food acidity as the main purpose of food additives called acidulants. Acid can promote the secretion of saliva, gastric juice, bile and other digestive juices, with appetite and digestive effects, its main role is also to adjust the pH of food, used as an antioxidant synergist, to prevent food rancidity or browning, inhibit the growth of microorganisms and prevent food spoilage. The main acidity agents are organic acids: citric acid, lactic acid, tartaric acid, malic acid, fumaric acid and adipic acid; inorganic acids: edible phosphoric acid, carbonic acid, etc.
① Citric acid
Citric acid is a colorless transparent crystal or white powder with a mild and refreshing sour taste, which is commonly used in the manufacture of various beverages, soft drinks, wines, candies, snacks, cookies, canned juices, dairy products and other foods.
② Malic acid
Malic acid, chemically known as carboxybutyric acid or hydroxysuccinic acid, is a white or fluorescent white solid. It has a special malic aroma and is widely used in yogurt, soft drinks, ice cream, chewing gum, ketchup, jam, vinegar, fruit wine, margarine and so on. Malic acid is better than citric acid in use, with strong acidity, a taste close to natural fruit juice and good pH adjustment. Use him instead of citric acid as acidifier, the dosage can save 20%, and can cover some of the odor produced by sucrose substitutes.

2）Sweeteners
Sweetener is to give food sweetness as the main purpose of food additives. According to its source can be divided into two categories of natural sweeteners and synthetic sweeteners. Natural sweeteners are divided into two categories: sugar and sugar derivatives, non-sugar natural sweeteners. Synthetic sweeteners are mainly chemicals with a sweet taste, generally tens to hundreds of times sweeter than sucrose, most do not have nutritional value.
① Saccharin and sodium saccharin
The chemical name of saccharin is o-sulfonylbenzimidate, no heat, high sweetness, sodium saccharin is 300-500 times sweeter than sucrose, is an early development of a chemical synthetic sweetener.
② Xylitol
Xylitol is a sugar alcohol made by reducing xylose or polyxylose from wood, corn cob and other materials. Xylitol is a white crystalline or crystalline powder with a cool sweet taste and a sweetness of 65% to 100% of granulated sugar, with a heat of 12.5kJ/g, which is higher than other sugar alcohols, and has the effect of inhibiting the activity of metacercariae that form dental caries. In addition to the common properties of sucrose and glucose, xylitol also has special biochemical properties. It can be absorbed by the body through the cell wall without insulin, and has the functions of lowering blood lipids and anti-ketone bodies, which can be used to make beverages, candies, canned foods, etc.
③ Stevia glycosides
Stevioside is a colorless or light yellow needle-like crystal with a melting point of 196℃～198℃. It is a mixture of various glycosides extracted from the plant stevia, which is relatively safe and has a sweetness of about 300 times that of sugar. Its taste is similar to sucrose, with pure sweetness, long retention time and delicious aftertaste. It is stable to heat, acid and alkali, and is an ideal low-energy sweetener.
④ Maltitol
Maltitol is 0.8 to 0.9 times sweeter than sucrose, does not produce heat after intake, and does not synthesize fat or stimulate cholesterol formation. The chemical properties of pure maltitol are very stable, with better heat and acid resistance than sucrose, sorbitol and xylitol. Maltitol can resist the digestive action of gastric juice, the hydrolysis of small intestinal enzymes and the decomposition of large intestinal microorganisms during human digestion. This special physiological property makes maltitol a high-grade health care sweetener with excellent taste and no calories.
⑤ Aspartame
Aspartame is a new type of amino acid sweetener with the appearance of white crystals or crystalline powder, pH: 4.5-6.0. aspartame has a pure sweetness like granulated sugar, 200 times sweeter than sucrose, no odor, and has a synergistic effect on food flavor. It has good safety performance, does not need insulin to participate in metabolism in body, can be digested and absorbed quickly, and does not cause dental caries.
⑥ Acesulfame
The chemical name is potassium acetyl sulfonate, molecular weight 201.24. Acesulfame is a white crystalline powder with high sweetness, which is about 200 times sweeter than sucrose (mass fraction 3% solution).
⑦ Other sweeteners
The main ones are oligofructose, erythritol, sweetener, somatose, etc.

Previous: Effect of xanthan gum on the texture of protein bars

Next: Effect of inulin on the physicochemical properties of wheat gluten protein