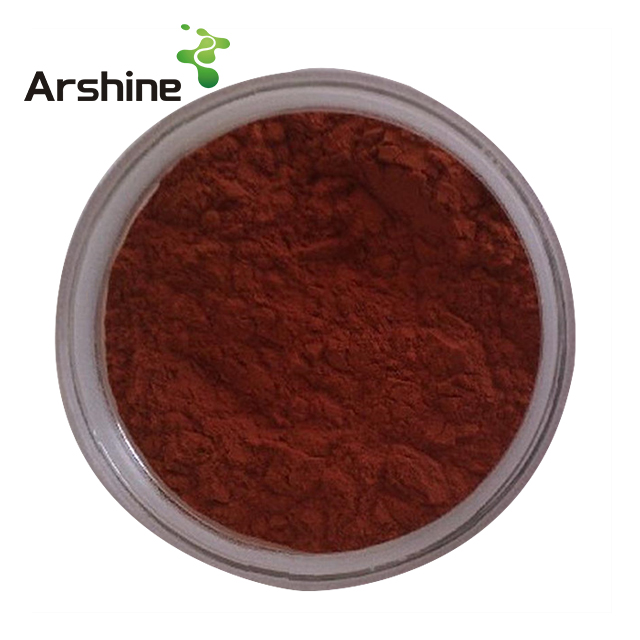 Astaxanthin /æstəˈzænθɪn/ is a keto-carotenoid. It belongs to a larger class of chemical compounds known as terpenes (as a tetraterpenoid) built from five carbon precursors, isopentenyl diphosphate, and dimethylallyl diphosphate.

Astaxanthin /æstəˈzænθɪn/ is a keto-carotenoid. It belongs to a larger class of chemical compounds known as terpenes (as a tetraterpenoid) built from five carbon precursors, isopentenyl diphosphate, and dimethylallyl diphosphate. Astaxanthin is classified as a xanthophyll (originally derived from a word meaning "yellow leaves" since yellow plant leaf pigments were the first recognized of the xanthophyll family of carotenoids), but currently employed to describe carotenoid compounds that have oxygen-containing components, hydroxyl (-OH) or ketone (C=O), such as zeaxanthin and canthaxanthin. Indeed, astaxanthin is a metabolite of zeaxanthin and/or canthaxanthin, containing both hydroxyl and ketone functional groups. Like many carotenoids, astaxanthin is a lipid-soluble pigment. Its red-orange colour is due to the extended chain of conjugated (alternating double and single) double bonds at the centre of the compound. This chain of conjugated double bonds is also responsible for the antioxidant function of astaxanthin (as well as other carotenoids) as it results in a region of decentralized electrons that can be donated to reduce a reactive oxidizing molecule. Astaxanthin is found in microalgae, yeast, salmon, trout, krill, shrimp, crayfish, crustaceans, and the feathers of some birds. It provides the red-orange color of salmon meat and the red color of cooked shellfish. The structure of astaxanthin by synthesis was described in 1975.

1. Applied in food field, it is mainly used as food additives for pigment and health care.

2. Applied in animal feeds field, it is used as an new animal feed additive to impart coloration, including farm-raised salmon and egg yolks.

3. Applied in pharmaceutical field, it is mainly used to prevent cancer and anti-oxidant.

4. Applied in cosmetic field, it is mainly used to Antioxidant and UV protection.